I've become accustomed to posting a link only to see the entire blogosphere post the same one eventually. What I find amusing is that on the rare occasion that I have an original thought, I inevitably find that someone else has taken that thought and run with it. What usually happens is that they do such a good job with the subject matter that my effort would pale with comparison, so I just add it to the junk-pile of ideas.

The recent entry from World O' Crap 'War on Christmas' POWs to be Held in Secret CIA Prisons is an example. He examines the rightwing blowhards who are stirring up the pot again this year over the use of the phrase "Happy Holidays" by the retail community.

I've already heard people calling in and asking if we will "allow" people to say "Merry Christmas", which shows me that the rabble rousers have been whipping up the sheep already. But what these nut-jobs fail to recognize: IT"S NOT ALWAYS ABOUT YOU! Sure, we have plenty of people who celebrate Christmas, but open your eyes and look around. It may be a bit different in other areas of the country, but we live and work in a very diverse, multi-ethnic community. There are plenty of other faiths and holiday celebrations that take place this time of year, not just Christmas. The use of "Happy Holidays" is meant to be respectful to all, and not any sort of conspiracy to dis' the Christians. Get a life. Or go out and buy Mr. Hankey's Christmas Classics and have a Merry F'ing Christmas:

I heard there is no Christmas 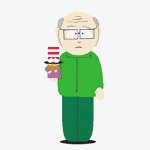 In the silly Middle East
No trees, no snow, no Santa Claus
They have different religious beliefs

“Hey there Mr. Muslim
Merry F'ing Christmas
Put down that book the Koran
And hear some holiday wishes.

In case you haven’t noticed
It’s Jesus’s birthday.
So get off your heathen Muslim ass
and F'ing celebrate.

Yet another good post on the subject from No More Mister Nice Blog!