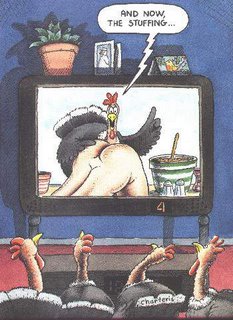 Hard to believe that Thanksgiving is almost here. Every year I consider participating in the Thanksgiving Day parade, but I usually wimp out. To get up way before the crack of dawn and freeze my butt off just for the opportunity to march in a silly costume, and catch a glimpse of a celebrity usually proves less appealing than the long drive to be with family. I had a momentary regret when I found out that I could have been a balloon handler, but perhaps everybody will be safer if I'm not involved with that. Maybe I'll break down and do it next year.

To get you in the mood for the holiday season, a few quick links:
The Road To Turducken
How To Cook A Turducken
Chef Paul Prudhomme's Holiday Dinner
If you absolutely must use a turkey fryer
Deep-Fried Turkey
The Truth About the Pilgrims and Thanksgiving
Turkey FAQ
Spirit of Fruitcake
Dubya's Thanksgiving Message
Turkey's Last Day