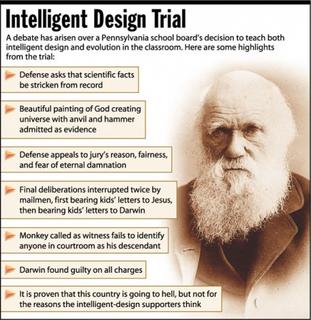 The Onion brings us the highlights of the Dover Monkey Trials.
|| JM, 8:14 AM

This comment has been removed by a blog administrator.

Clyo, at 7:48 PM
I addressed this question on my blog, for while I believe in God, I also believe God used evolution to create us.

What I find astonishing is that there are people who insist dinosaurs were on Noah's ark - they would have had to be, you see, in order for the Bible to be "valid."

They maintain, therefore, that dinosaurs lived about 7 thousand years ago, as opposed to the fifty some million years indicated by carbon dating...

Of note, 1 of 5 American adults also believes the sun revolves around the earth.

We definitely need better education in this country. Too bad the Republican agenda is to bankrupt public schools.

But let's face it. If we were better educated, as a nation, and understood the science behind so many of the wedge issues Republicans have created to exploit our ignorance, Bush never would have been elected.

There's a definite strategy to their madness.