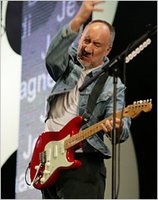 Ever get the feeling that some people just don't get it? First, there's the news that Tom Delay thinks that the "act" that Steven Colbert does is the real deal. He posted a clip from The Colbert Report on the Support Tom Delay website where Steven "interviews" Robert Greenwalt, director of the movie WAL-MART: The High Cost Of Low Price. Tom apparently is that desperate for anything resembling support that he misses the parody in the Colbert approach.

But then, to add insult to injury I see that right wingers listen to rock & roll and hear conservative anthems. A recent National Review article listed the "top 50 conservative rock songs of all time." Ignoring the fact that most of these songs were born from a liberal point of view, the article points out how these songs reflect conservative ideals and traditional values. Since the lyrics of "Won't Get Fooled Again" end in "Meet the new boss/Same as the old boss" they take this cynical skepticism about revolution as a reflection of conservative idealism. I'm not sure how Pete would feel about that.

Bottom line is that you can spin things any old way you want to if you are so inclined, regardless of facts to the contrary. Dubya and his minions have provided ample evidence of that. But sometimes you have to sweeten the pot, as the recent payments to Iraqi journalists to tell the "good news" about Iraq reminds us. Hard to believe that they missed all the positive stories on their own.

The deal with delay using colbert is to me the funniest, most pathetic and the most telling proof of just how stupid they all are.

pissed off patricia, at 9:58 AM
they really are brainwashed. I pretty much think you have to be either brainwashed or a complete moron in order to stand behind bush and his conservative cronies these days.

Ellie, at 8:01 PM
The good news is that there is this women named Juanita whose entire website has been dedicated to getting rid of Tom D. since she has is in his district. She's got some funny inside stuff on him.
Check her out: http://www.brazosriver.com/